You may not want to put all your eggs in one basket, but in business backing the big transformation bet is the only way to win says author, speaker and advisor Geoffrey Moore.

Last month, Meet the Boss worked with Dell EMC and acclaimed author and advisor Geoffrey Moore on a three-day event for leadership teams from companies including Barclays, Vodafone and Walt Disney.

Dell EMC had asked around 1100 customers to self-assess their digital transformation journey. “Less than 5% of the companies globally put themselves in the category of ‘I feel like we’ve transformed’, or ‘we have a DNA of transformation within the company’,” says Kevin Roche, President, Global Services, Dell EMC. Collectively, we wanted to help the 95% move along.

We started with one black and white problem (established companies are not set up to transform themselves), Geoffrey explained his brilliant four-zone framework for addressing it, and we took each team through five deep-dive workshops tailored to their 50 shades of grey, and led by Geoffrey and Dell EMC’s senior consultants.

It was great. Midway through one morning, a group I was talking with were excitedly bundled into an empty room by their CMO. “We need to grab this with both hands,” she said. “There’s so much we don’t know.”

To that end, we will be sharing lots of fascinating content from the event shortly. In the meantime, you might be interested in this small but perfectly formed insight: how to teach the world you’re a loser.

One is the magic number

We scheduled some time to interview Geoffrey and Kevin separately. But they’re planet brains and so, in the best interests of everyone, I asked if they would interview each other.

“There’s only so many things you can transform at one time before you stifle yourself,” says Kevin. “And that number is one.”

“You’re right. People say ‘don’t put all your eggs in one basket’,” says Geoffrey. “Forget the basket. If a chicken tries to have more than one egg at a time, it’s bad for the egg and bad for the chicken.”

He continues: “Because people have had patchy success, they tend to want to bet on more than one disruption at the same time. Which even makes it worse, because now you’re talking about multiple J-curves. The most destructive pattern you can see is starting a J-curve, one or more, getting into it deep enough to start losing money, trying to be brave and go further, you’re losing more money, and then you pull out. And basically, you’ve taught the world that you’re a loser.”

Adam has interviewed over 450 chief executives from Adidas to Zappos. He has spoken on communication, leadership, and innovation at several major conferences, for organisations as diverse as CA and CeBIT, and is Master of Ceremonies for a number of brilliant business events. 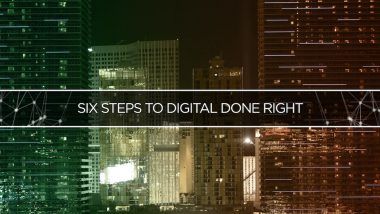