Blockchain is a term that refers to that exciting and equally terrifying nebulous space of digital currency framework you hear thrown around at cocktail parties. Bitcoin is the most well known form of digital coinage that utilizes the blockchain, but there are other versions out there starting to compete. Like ether (How genius – It’s like air, all around us but never seen). Yes, all these new emerging digital purses are exciting, so why aren’t financial experts jumping at the chance to invest in blockchain? Here’s why.

So in June of 2017, markets for ether experienced a huge flash crash that saw prices fall from more than $365 down to as low as 10 cents on one exchange. The crash occurred when a huge sale of ether, a cryptocurrency linked to the ethereum computing program, was made on the GDAX, an extension of the popular Coinbase exchange geared towards professional traders. Prices bounced back shortly afterwards, but you can imagine the collective heart attack of professional traders who saw their holdings of ether wiped out in just a matter of seconds.

It’s the kind of event that many financial experts at the GDS FST Summit seemed to be anticipating, and why many admitted they won’t be seen getting involved with blockchain any time soon, some even stating they’re “7 to 10 years out.”

“You’ll have to get the bureaucracies involved and the governments and the regulatory agencies,” said Leonard Prestridge, CIO of Community One Bank. “The federal government wants to monitor and makes sure the transactions are legitimate and not going to unauthorized places – I think that’s the key that you have to figure out”

As people on social media began to report losses of as much as $145K in the blink of an eye, serious questions are being asked about what triggered the process and if it was an attempt at market manipulation.

What’s interesting is despite this melee and a collective apprehension I’ve witnessed when discussing blockchain and virtual currencies like Bitcoin, I’ve yet to meet anyone who has written blockchain off completely. It’s always a “not right now” or “I’m going to let the big boys play around and figure this out before I jump in.”

“I agree it’s not formulated enough,” said Christopher Bowman, VP of Global Technology Services at US Bank. “Of course a lot of banks have huge financial services groups around blockchain and we’re certainly working on it from an innovation perspective, but, it seems just too far out right now.”

“I say no to it in its current form because it’s still in its infancy and there isn’t a standard set for it yet,” explained Prestridge. “I think once a standard is set and it’s agreed upon by all organizations, then it has some viability.”

So now we must wonder how many forms blockchain will have to take before it works itself into the hearts of all in financial services.

“Maybe there will be some driver that will eventually push us in that direction, but I think it’s still up in the air what virtual currency will even be settled on,” Bowman told me. “I’m sure there will be one or two or three [versions] and maybe it will be a competitive marketplace, but for all the challenges that we have with omnichannel, trying to drive revenue, get customers, and do it seamlessly, we can’t even get that right yet, let alone with blockchain!”

Perhaps he has a point. As we try to get a handle on cryptocurrency volatility, maybe it’s best to learn to crawl before we run. 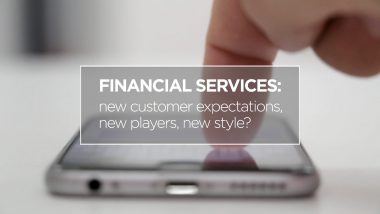